The Prussian Empire Declaration of Existence

The Prussian Empire Declaration of Existence

The Prussian Empire is based on the strengths that we are a Constitutional Monarchy.  The Prussian Empire is an evolving Democratic Alliance.  We are a Multi-Colored Sphere, meaning that Trade Circles are not confined to one particular Trade Sphere, therefore easing the burden on member nations joining our Alliance.

II. Entry as a Citizen

Anyone not in an aggressive war has the right to apply to be a citizen of The Prussian Empire.


It is the aim of The Prussian Empire to educate new members to our Alliance, with in game etiquette. Teach them our Democratic values, and above all encourage new members to remain active, by introducing new interesting items onto our forums.

All citizens of The Prussian Empire shall enjoy equal rights and freedoms and be allowed to openly voice their opinions. Provided it does not;


1. Use any call for the use of violence, or national, racial, religious hatred, or any form of intolerance.


2. That citizens attempt to bring extremist politics into the realms of Planet Bob, from elsewhere.

The Government of The Prussian Empire shall consist of a Constitutional Monarchy. The Government shall be headed by a Monarch who appoints all Ministerial positions, and a Parliament, to be elected every 6 months.  Free and fair Elections will be held, to determine who is elected to Parliament.

1.  The Prussian Empire is a non-aggressive alliance, its Citizens are not permitted to Tech Raid or wage aggressive wars, without an alliance wide declaration of war.


2.  We are a peaceful Alliance, however if attacked we will fight back! We understand that from time to time there will be the odd Rogue, or new players who attack at random, etc. These disputes will be settled by diplomatic negotiation. The Prussian Empire will adhere strictly to exhausting all avenues of diplomatic measures, before counter-attacking an aggressor. This is in line with our Charter.


3.  Our Nuclear Doctrine:- Nuclear weapons would only be used as a last resort against an aggressor. The use of such, requires the full backing of Parliament, by majority vote before the use of such weapons can be authorized.

The Prussian Empire shall be protected by KoRT. 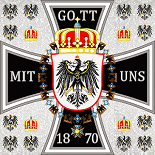